The Motivating Power of Hope and Resilience

These eyes shout Pat’s sad story with more force than blasting it through a megaphone. I met Pat last fall when our team spent an afternoon in a crowded, dead-end alley in Naples, Italy interviewing African refugees who had recently survived numerous death-threatening situations before reaching safe shores. Pat and a dozen others had each traveled separately from different countries but told similar stories; a third contained elements of secret societies in their telling:

Mathudo said, “There is something going on between people and witches.” He became estranged from his parents when they told him he must become a member of a society involving this association. He was told if he joined he could get anything he wanted in life. One night he was taken from his home to a “dangerous place” where they cut ritualistic marks onto his torso. He screamed and others came to his rescue. His life was threatened and he left the country. He’s not sure he’ll ever see his family again because he fears for his life back home.

Leo, another African refugee, told us that after his father died, he was informed it was his duty as the oldest son to take his father’s place in a secret society called Poro but that he would have to be initiated first before he could learn more about it. When he asked his aunt about the society, she said she was sworn to secrecy and couldn’t say more. She was concerned enough about Leo’s welfare that she orchestrated getting him out of the country to “save his life.” Leo hopes to gain an education and become an engineer or learn a trade.

Godspower explained his father was a “society man, big society” in a highly secretive organization. His Christian mother had raised him with her beliefs and when Godspower turned eighteen, his father beat him badly—almost killing him—when he refused to renounce Christianity and follow him into his society. His mother sought medical treatment, found safe refuge, and didn’t let him return home. His father began looking for him. After Godspower could walk again, he escaped to Libya where he began working as a welder, but was never paid. He witnessed a great deal of lawlessness and violence there. Finally, he crossed in a boat to Italy, where he now resides and hopes to find work welding again.

Pat was our lone female interviewee in Naples. She escaped from her father’s ancient village cult, married at age eleven and bore two sets of twins. However, cult members forcibly took her children from her and killed her husband in the process because they considered the infants “bad juju” for the village.  Pat became a widow before age fifteen. She endured gang rape orchestrated by a Christian priest, and escaped to a different village where she lived for four years before it was torn apart by rival tribes. Then, aided by a smuggler, she crossed the Sahara Desert and almost died for lack of food and water only to be imprisoned and tortured in Libya for eight months before finally crossing the Mediterranean Sea to Italy. She’s still there waiting and hoping for a better future. Her eyes bear witness to her suffering.

The astonishing stories of abuse and violence told by all twelve of the African refugees we interviewed in that alley last fall are symptomatic of what is currently happening to thousands of African refugees who are caught in the inhumane net of African cultural/political turmoil and Libyan terrorism.

Their stories help me understand what is it that leads a person to abandon home, family and friends, to leave behind culture and country, to uproot oneself from everything that has contributed to one’s identity, and to travel a road paved with uncertainty, danger, and possible death to a foreign place where there is no friend. Their stories help me understand the motivating power of hope and resilience. 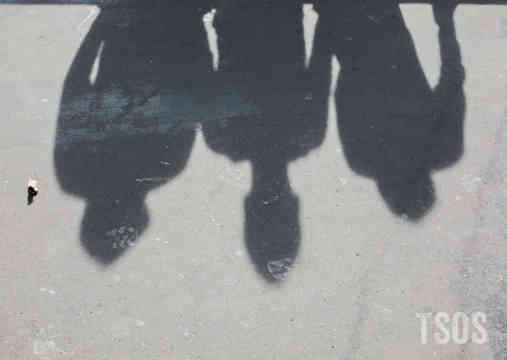 A small part of me imagined what that kind of high-stakes limbo... 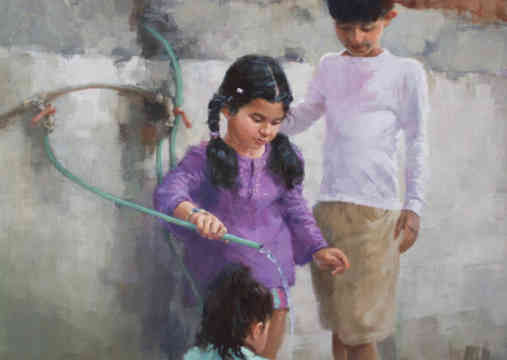 Good news - the painting 'Running Water' got into the Zion Art... 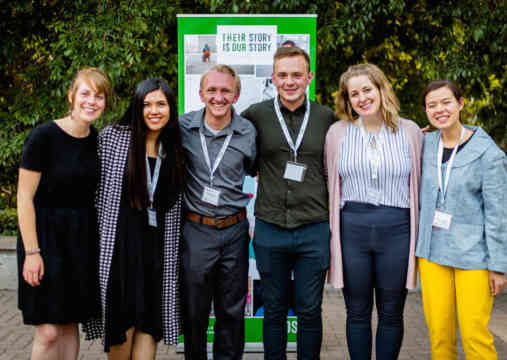 Our First University Chapter at BYU and Debut Event

Six weeks almost to the day from when we were officially recognized...