The Unique Registry of Victims maintained by the government of Colombia shows that over 9 million people were affected by armed conflict, with over 5.6 million IDPs as of 2019. (Source: UnidadVictimas.gov) The vast majority of these IDPs were from rural areas who migrated to urban centers. Approximately 5% of the total population of Bogotá, Colombia's largest city, is made up of IDPs from rural areas. The economic effects of becoming an internal refugee are stark. The International Committee of the Red Cross (ICRC) has estimated that 99% of all people displaced from rural areas live in poverty upon arrival, as the skill set needed to live in a rural environment is not easily transferable to an urban environment. As of 2019, only just over a quarter of IDPs said they were able to overcome the vulnerabilities associated with displacement. (Source: OCHA)

Even with the signing of the peace agreement, internal displacements continue to occur. Conflicts between active guerrilla groups and paramilitary organizations have resulted in 106,000 new displacements in 2020, (source: UnidadVictimas) primarily from Afro-Colombian and indigenous people from the departments along the Pacific coast and in the North. Additionally, environmental disasters and the seizure of rural land for development continues to increase the number of people being forced from their homes. 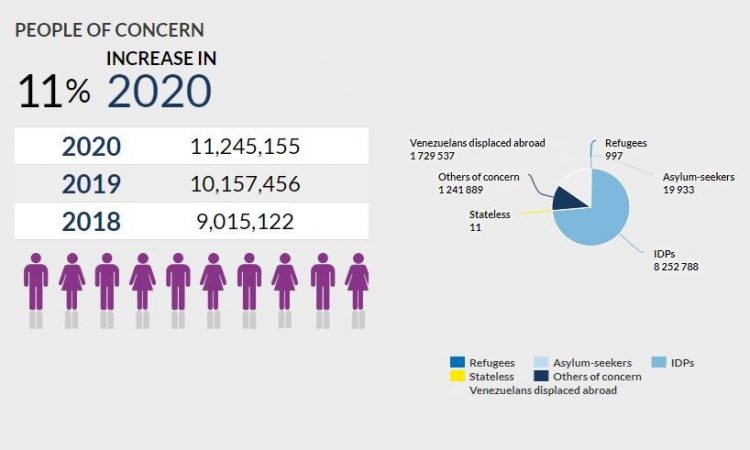 The UNHCR reports that as of December 2020 the number of Colombian IDPs has grown to 8.3 million.